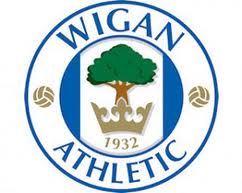 So the City juggernaut continues to roll on, and Manchester (and Salford) as a footballing City('s) goes from strength to strength.  It is hard to pin point exactly which was an easier win this season, the opening day demolition of Swansea or yesterdays hammering of Wigan.  I would suspect ultimately that the Welsh side put up far more of a fight than the Lancashire club, perhaps surprising after the strong start that Roberto Martinez and his side have made to the season.
In truth the 3-0 scoreline doesn't really do City justice, it should have been 4-0 by half time and it could easily have been 7 or 8 by the final whistle, if we had been a bit more ruthless and clinical in front of goal we could have inflicted a similar thrashing to that which Wigan suffered at Spurs a couple of years ago.


Macini demonstrated the importance of his whole squad and rang some changes, Edin Dzeko was left out and rested after his heroics at White Hart Lane, as was Gareth Barry, Samir Nasri and Pablo Zabaleta.  James Milner, Adam Johnson, Micah Richards and Carlos Tevez came in to replace them and fortunately the changes didn't change the sides fluidity too much. 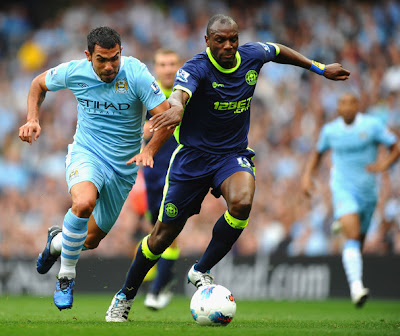 City took the game by the scruff of the neck early on with Sergio Aguero scoring his first with a really neat finish after good work by a rampant Clichy and Silva.  They were perhaps unfortunate to not build on the lead after Richards crashed the underside of the bar after a superb raid down the right, and again when Kompany hit the woodwork with a header off a corner, there was also a good chance for Adam Johnson to extend the lead when he cut in from the right hand flank.  The best opportunity however was a penalty, after Silva was crudely hacked down by Lopez, Tevez took the ball and hit (scuffed) one of the worst penalties that you are likely to see, it was so weak Al-Habsi could probably have just stepped to his left and picked it up! 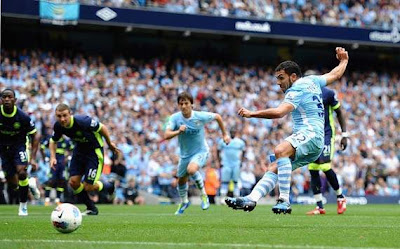 1-0 at half time, and Wigan found a 20 minute spell either side of half time in which they managed to impose themselves on the game slightly.  Di Santo should probably have done better with a one on one situation where Hart had run out into no mans land, and just after the break Hugo Rodallega hit a low shot that wasn't so much saved by Joe Hart but deflected off the England keeper wide of the post, that however was all Wigan would really have.


The introduction of Samir Nasri gave City an extra spark and it wasn't long before some exquisite one touch football between Silva and Frenchman released Aguero for his second that he slipped past the keeper into the corner for a supremely confident finish.  City became dominant again after the second was scored and the third wasn't far away, superb play again by the exceptional Silva where he showed skill, strength and technique resulted in Kun being released to calmly slip home his 3rd of the afternoon into the exact spot that he had dispatched the previous one. 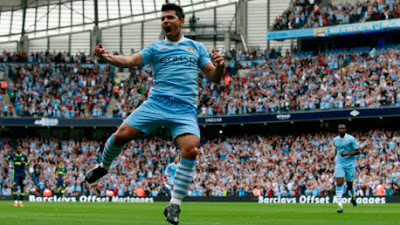 City finished the game at a canter, Balotelli was introduced and he looked sprightly without any real service, youngster Abdul Razak was given a 10 minute cameo which I suspect will be built upon in the League Cup next week.


If we are being ultra negative I suppose Adam Johnson could have done more, and really we should have been more clinical in front of goal and taken all of our chances, but that is really clutching at straws, it was another superb performance overall and it will further add to the confidence and good feeling that appears to be around the team and players. 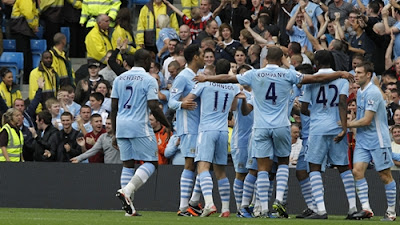 Not let's get on with the all important figures:


Joe Hart: 7 - Would have been 6, not through poor performance, just had nothing to do, but I just watched 'tunnel-cam' on the OS and seeing his motivational speech before the second half was fantastic, so bumped to a 7!


Micah Richards: 8 - Attacked superbly well again, showed determination to get forward but also back, was incredibly unlucky to not score in the first half when he hit the bar.  Dealt with Rodallega well at the other end of the pitch as well.


Vincent Kompany: 8 - Rock at the heart of the defence, unlucky to not score with a good header in the first half, organised well and mopped up everything that he had too.  He is really excelling in his role as captain with his right hand man Joe Hart.


Joleon Lescott: 7 - Was given a couple of scares by Di Santo but grew in confidence as the game went on, made one particularly good rampaging run early on.  Also should probably have had a goal from a Yaya Toure shot that the defender tried to deflect into the net.


Gael Clichy: 7 - The engine on this guy is insane, he is so much quicker than I realised.  He struggled with Moses at times but much like Lescott grew in confidence as the game went on, he also provided a couple of excellent crosses that unfortunately went unused.

James Milner: 8 - Another exemplary performance in the centre of the field, Mancini finally seems to have realised his best position.  He bombed on when required and got back to make vital tackles, does all the less noticeable dirty work well.


Yaya Toure: 7 - Plying his trade in his more natural holding role this season we are seeing less of Tourepartnership with Milner, they work well together.


Adam Johnson: 6 - A frustrating day for Johnson, nowhere near as bad as some would have you believe but always not perfect.  Work rate seemed improved, he tracked back well, but not everything came off for him, perhaps he overcomplicated things on occasion.


David Silva: 10 - Really not going to write much, it's all been said before.  Fantastic, magical, strong, full of endeavour, skillful.  There is no better midfielder playing in England currently, and not many better in Europe.


Carlos Tevez: 6 - Work rate is definitely still there, no loss of passion but not quite up to match sharpness yet.  He was a constant threat but had a tendency to take the wrong option at times, woeful penalty didn't help him either.


Sergio Aguero: 9 - Now scored 6 for the season and this was a great hat trick.  He passes and places the ball into the net and has the ability to place them right inside the post making them impossible to save.  His work rate is also immense and he just seems to love playing the game.


Samir Nasri: 8 - Steadied the ship when he came on and linked up wonderfully with Silva and Aguero, managed to notch up an assist on the short time he was on the pitch, he looks a real star.


Mario Balotelli: 6 - Didn't really make much of an impact, worked hard and scampered about.


Abdul Razak - N/A - No real time to judge, but good to see him getting time on the pitch. 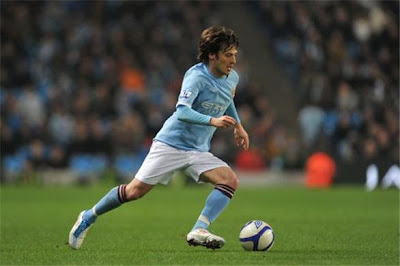 I suppose it seems strange for a player to score 3 times and not get Man of The Match, and in the stadium that award went to Aguero and understandably he will get most of the plaudits but for me it has to be David Silva.  As always he was behind everything that City did, he ran the show and provided the tempo, he caused so many problems going between the lines and was impossible to keep quiet.  It is not just his skill and passing that is impressive his work rate and strength is also superb for a player that at first appears so lightweight.
Posted by Joe T at 04:42