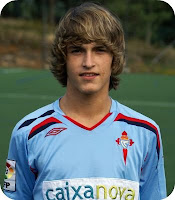 Over the past couple of weeks there have been numerous reports in the media about City moving for Celta Viga midfielder Denis Suarez.  Since the club was taken over by ADUG we have been linked with a different player every day, but it looks like there really could be something in this one.


Goal.com are reporting that the deal has been signed and sealed, and this is backed up by a message on the Celta website claiming:

"Celta Vigo and Manchester City have today completed the transfer of the rights of midfielder Denis Suarez, who will play for the English club next season....Celta would like to thank Denis Suarez for his efforts and dedication in the past few seasons with our junior team, and we wish him great success in his new undertaking in English football."
There has been no word from anyone at City as of yet, but it would appear that this one must be pretty much done if his current club is reporting it like this.
Hardly a big name in world football, what do we know about the Spaniard?  Well he is 17, and was very highly regarded in his home country.  Whilst he has not appeared for Celta's first team he has been extremely successful at youth and reserve level, he has also been watched on numerous occasions by Barcelona, Real Madrid and Chelsea.  It is reported that the deal taking him to Eastlands has initially set the club back £850,000 but this could rise too £2.6million depending on performances and certain other clauses.
It could be considered somewhat of a coup that City have signed the player who has been courted by some of the biggest clubs in world football.  Lets not get ahead of ourselves however, I doubt we will be seeing Suarez in the first team any time soon, most likely he will play for the reserves for a while to find his feet, although there is suggestion from Goal that he will join the party traveling to America as part of the pre-season preparation.
If this signing is ratified over the next couple of days it is another clear message to the clubs ditractors that youth development is a vital part of Manchester City moving forward, and that our scouting network is unearthing quality players not just locally but around the world as well, and on a more selfish level, it feels great to beat Barcelona to a player!
Posted by Joe T at 03:08