Rumour Mill: More Chance Of Us Resigning Jo Than This Italian Enforcer...

When it comes to football websites, there are those that only deliver fact or close to it (BBC Sport), there are websites that just make up nonsense (Tribal Football, Caught Offside) and then there are some in the middle that pretend they have sources in high up places, and sometimes break a credible story but mostly just publish tosh.  This rumour is from goal.com a website that fits firmly in that final category. 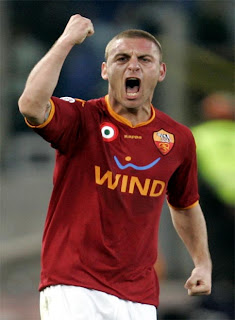 The widely ridiculed footballing website has today published a story stating that Roma enforcer Daniele De Rossi is ready to make a sensational switch to England and possibly to City, they have however not just made these claims and left them hanging, they also have direct quotes from a 'source' supposedly within the club...now clearly these 'sources' are always just the work experience kid, but for some reason they think we are all fools and that we will fall for it!


The tough tackling Italian currently has a contract that runs up until 2012, and talks over a renewal have been ongoing.  According to the report he wants not only a bumper pay rise but also assurances from the clubs owners that they will be spending big money to take the team in the right direction.  If these talks don't go well, clearly the club wouldn't want to lose him for nothing next year and that is why it is claimed that an offer €23million from City would tempt them to sell.


"Manchester City are ready to offer Roma €23m for De Rossi and can give him €9m per annum over four to five years....De Rossi is aware of Mancini's interest and his attempts to bring him to City....He wants economic and technical guarantees from Roma for him to stay. If these guarantees are not met he will not sign the new contract. At the moment, he is very uncertain as Roma have been lukewarm with him in terms of this new deal. The new owners do not want to take on heavy financial commitments before looking into all the club's accounts.". 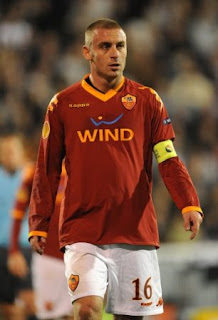 Let's just for a minute go along with this whole story and pretend we don't think it's utter tosh.  Manchester United have courted the player for years and there is also supposedly interest from Chelsea so if he were to move on there would definitely be competition from other big clubs, whether these sides would compete with the financial package on offer from City seems unlikely so it could possibly put Roberto Mancini in pole position.
Now for the negative (realistic) viewpoint.  De Rossi is Roma through and through and it seems highly unlikely to me that he would play for another club any time soon, he has had the opportunity to move on several occasions before, with that lot from Salford generally thought to be the side closest to sealing his signature.  After all this time though he has stayed put and I don't see him going anywhere else in the near future.  It is highly likely that there could be complicated negotiations over a renewal of his contract, but the bottom line in my opinion is that this is just a ploy from the player and agent to secure more money, we are being used.
It should be pointed out that he is a top quality player and would obviously bring a lot to City, albeit in a position that we are hardly short, but I just don't see anything in this one.  Nothing about the story seems particularly convincing, the website, the 'source', and the comments, for me, nothing really adds up...
Posted by Joe T at 07:58