Normally there is not a lot to say about domestic football during an international break, but player recruitment appears to be continuing apace this week if the tabloids are to be believed.  It appears that youth development is the order of the day with City supposedly close to capturing 2 of the most exciting prospects in world football.


With the recent unveiling of the new training and youth development centre there is a clear model being created to ensure the long term success of the football club.  With Financial Fair Play and all that goes with it, the days of building new teams every year by throwing money about are gone, and as much as we know that these new rules were put in place to maintain the status quo and stop teams like us achieving anything, it would still be preferable to do it by youth development as opposed to huge spending. 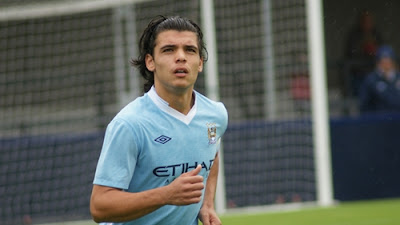 Over the last 18 months to 2 years we have recruited some top young players Karim Rekik, Denise Suarez and Joan Roman have all joined the club as well as many others.  It now appears that this new policy is set to continue with possibly two more youngsters arriving. 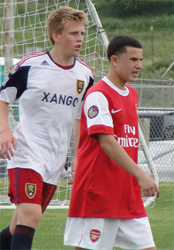 The more concrete of the two stories comes from Sky Sports who claim that 17 year Raul Mendiola will fly to Manchester on Saturday to complete a move to Eastlands.  Interestingly he currently plays for 'Arsenal FC' who are based in California, they are clearly linked to the Emirates club and it would be somewhat of a coup should City managed to secure his signature as it appears they could do.  The Mexican forward (who could also play for the USA) has been a prolific goal scorer at youth level and was named 'US Development Academy U15/16 Player of the Year' two years in a row....what a world famous accolade.


City sent scouts to watch him play in the 2011 Generation Adidas Under 17 cup and were thought to be incredibly impressed with his ability.  Recently Mendiola has been training with MLS giants LA Galaxy to further improve his game ahead of a move to Europe.  He has been tracked by numerous clubs, but speaking too TopDrawSoccer.com he more or less confirms that there is a big possibility of a move:

"I'm pretty excited...It's one of the top clubs in the world...I've been told that there's a possibility that I could be loaned out to (Espanyol) in Spain for a year, or I could stay with Man City.".
Everything seems pretty much in place on this one and personally I am pleased to see us making moves for these top quality young players.  The quotes suggest talks have progressed well and hopefully this one could be wrapped up over the weekend.

The second possible signing is Belgian youth international Zakaria Bakkali.  The 15 year old is a striker who is currently on the books of PSV Eindhoven in Holland, much is expected of the Moroccan born forward, in fact hilariously The Mirror dub him 'The Best Young Player in the World', I suggest that description is taken with a pinch of salt.
The newspaper go on to claim that a move will be sorted in the next few days, there is no indication of money but they do describe the transfer as a 'big money deal'.
I suppose there isn't really much more to say, hopefully these 2 deals will come off and the expansion of our youth development set up will continue.  We all want to see big names coming in from time to time but if we can start to bring through these youngsters from a young age it will help the club massively and help us go from strength to strength and build upon this solid base that we are currently demonstrating.
Posted by Joe T at 07:21