Is 4 Points From Chelsea & Stoke a Disaster? 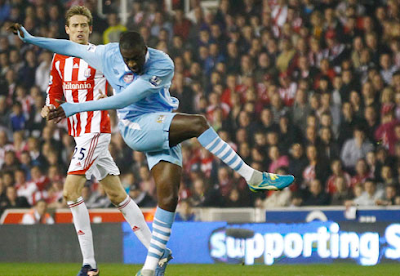 Not for me to be quite honest!  Incredibly short one today, just think once again it needs to be reiterated what we have achieved this season, so here goes.


Firstly it must be noted that overall our form this season has been superb.  It has been so good in fact that on the way to where we are now we have broken a few records and on top of that we have managed to amass a number of points that would have secured the title in every other season.  This though isn't enough for some people and has left them unsatisfied.  I suppose that is down to the fact that for most of the campaign we have been ahead by a few points, not just goal difference, but all things considered we are in a great position, and well on track to meet our seasons points target.
This year though United are looking like they might just pip us to the post and we may not win it, but don't let that make you lose sight as to what we have achieved this season. How many of you expected us to be in the position we are now at the beginning of the campaign?  If you had been offered this points total and goal difference with 8 games to go last August you would have taken it in a flash! 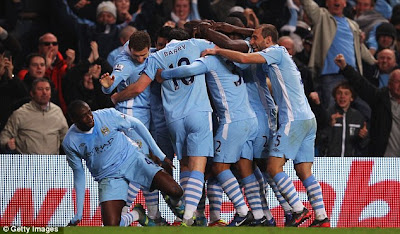 There are still 24 points to play for, and granted our away form is patchy, but anything could still happen.  Even if we did finish as runners up a few points behind the other lot it does not mean this season has been a disaster in any way shape or form.  The signs are there that in the next couple of years we will be in a position to absolutely blow everyone away, and I am certain that is coming.
Our league position has given us false expectations, taking 4 points from Chelsea and Stoke away is far from a bad return, sure 6 points would have been better, but to come from behind in 2 games to take 4 points I really don't see as any reason for doom and gloom!  Besides it could be worse, we could support Liverpool.....
Posted by Joe T at 02:48