Well that's one of our bogey teams laid to rest, maybe now we can even manage a win at Goodison Park some time.  It wasn't just the win yesterday, but the manner of the victory that was remarkable.  I think many blues would have taken a point away from North London, but not even the most positive City fan would have predicted the mauling that Tottenham suffered yesterday, but when it happened we all loved every single minute of it.


6 points from our opening 3 games would have been acceptable, and 7 would have been a really good return, but to start the first international break with the full 9 is great and when you add in the performances that we have turned in it really becomes too good to be true.  I should probably remember who it was, but someone on the TV said after the Bolton game that City were playing the best football in the Premier League and I don't think anything this round of games has changed that, that includes our chavvy neighbours in Salford. 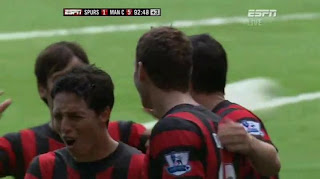 After the Bolton game I sort of felt that we probably wouldn't perform that well again for a while, but as it happens the win at the Reebok wasn't a patch on what we did yesterday.  The starting 11 demonstrated more than ever a shift in the managers thinking with just 2 defensively minded midfielders shielding the back 4, allowing a forward 4 of Dzeko, Silva, Aguero and Nasri to torment Tottenham.  Any doubts about how quickly the newly signed Frenchman would take to settle were soon banished when within the opening 10 minutes the former Arsenal man looked more than comfortable alongside his new team mates.  He was superb, not only did he lay on 3 goals for his team mates he also did the dirty work and tracked runners to help out the defence as well.  One particular highlight for me when I was watching the game back was his expression (which can be seen above) just after Dzeko had crashed home his 4th, a look of disbelief about the quality of his new colleagues, fantastic to see. 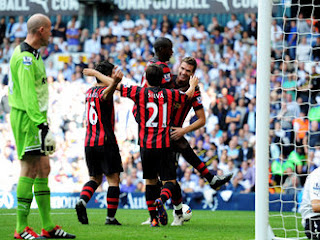 Talking of Dzeko, he was once again superb, he led the line fantastically well and was a constant threat and worry for the Tottenham back line.  The opener came when a perfect Nasri cross was met by the Bosnian's outstretched foot, on paper it may sound simplistic but the interplay and wonderful one-two between Aguero and Nasri that lead to the goal was superb.  The second was a game changer, shortly after Crouch headed a wonderful volleyed Bale cross inches wide, a goal that would have turned the game on its head, City countered and another inch perfect Nasri cross was met by Dzeko who managed to arch his back and strain his head to head the ball back across goal and into the net, it was a remarkable finish and from a technical point of view could have been the pick of the bunch.
The half time break came and went and any fears of City once again throwing away a 2 goal lead again were ended when Dzeko completed his hat trick tapping home a low Toure cross, again some of the build up was superb and it essentially won the game for the blues.  Aguero added a 4th after he was released by Nasri, he showed fantastic strength to beat Dawson before hammering the ball past Friedel from an acute angle, it was a great goal.  Predictably however we did manage to find a way to blot our copy book, the introduction of Jermain Defoe lifted Spurs and he saw a rising shot smartly turned over by Hart, from the resulting corner however, some incredibly sloppy marking by Yaya Toure resulted in Younes Kaboul slamming a header into the City net.  Spurs didn't really rally however, they withdrew an off form Modric and after making 3 changes van der Vaart limped off with a strained ham string resulting in the London club having to play with 10 men. 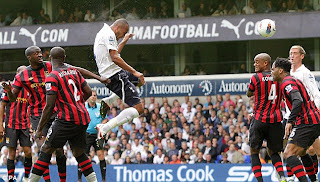 Perhaps we then left them off the hook slightly, later in the day United proved they don't provide any mercy, they continue to pummel their opposition, the last 25mins was played out with City firmly in control, content to play keep ball without really testing the Tottenham defence.  It wasn't until deep into injury time that the score board was troubled again, Dzeko and the again superb Barry played a neat one-two outside the Spurs area resulting in the Bosnian driving home his 4th of the day with a sublime left footed finessed finish.  The whistle blew immediately after the restart to put Spurs out of their misery, but if the truth be told Tottenham weren't even that bad, City were just an absolute sensation. 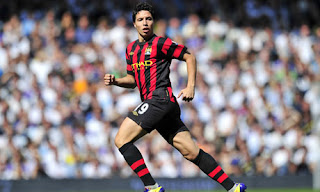 Enough waffle, what of the slightly unimportant numbers:
Joe Hart: 7 - Was excellent when called upon, made some sharp saves in the second half from Defoe and kept some Spurs efforts out early on.  Nothing he could do about the goal, a pretty decent perform let down by his defence on one occasion.
Pablo Zabaleta: 6 - A surprise inclusion at the expensive of Richards, got booked early on and was at times given a fright by the pace of Bale but got to grips with him as the game went on.  Took a couple of typical bangs to the head towards the end as seems normal.
Joleon Lescott: 7 - Could possibly be at fault for letting Crouch fire a header just wide in the first half but generally played well and looked strong.  The partnership between him and Kompany continues to impress Kompany is the brains, Lescott
Vincent Kompany: 7 - Another great captains display, he made some superb tackles again taking the ball cleanly and snuffing out various attacks.  He also used the ball well I thought, he rarely gives it away and even surged forward from time to time to support the midfield.
Gael Clichy: 7 - He attacking well and provided width, he was a constant threat to Corluka and some of his link up play with Nasri was superb. Didn't really allow Lennon into the game after a shaky start, he matched his pace and snuffed out his threat.
Gareth Barry: 8 - Barry has been massively improved this season and this was another great display, anchored the midfield supremely, used the ball well and mopped up nicely.  He attacked at the right times and filled in gaps as well, all action, superb, undroppable at this point for me.
Yaya Toure: 6 - Toure looked assured and confident again, but blotted his copy book by going to sleep on a Tottenham corner and allowing Kaboul a totally free header resulting in a goal.  At 4-0, it didn't matter, but it's a lapse that could have cost us under other circumstances.
David Silva: 8 - Superb AGAIN, was a constant threat and his movement along with Aguero and Nasri was fantastic.  The Frenchman might take more plaudits but the Spaniard's impact cannot be underestimated.
Sergio Aguero: 8 - Lovely link up play with Nasri to create the first, and scored a beauty as well.  The 3 attacking talents behind Dzeko were impossible to deal with, their movement was so fluid and considering Kun still isn't 100% fit it was extremely impressive.
Samir Nasri: 9 - It may not have been as sensational as Aguero's debut, but it was close, any question about how he fits in were soon banished.  He got 3 assists and was at the heart of every good move, when you add in his defensive work too he looks a great signing.
Edin Dzeko: 10 - I said to myself it would take something extraordinary for me to ever award a 10, well this was it.  The Bosnian hit 4 goals and has now scored 7 in 4 games, his goals were great, but his all round play for the team was superb.
Substitutes:
Micah Ricahrds: 6 - Attacked well and worked very hard, took a couple of knocks but really not enough time to impress.
Stefan Savic: 6 - Brought on to add an extra body in the defence, looked tidy and neat, but no time really. 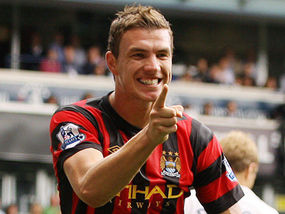 Only really one choice for Man of the Match, that is Edin Dzeko, he endlessly tortured the Spurs defence and proved what a handful he can be.  He is slimmer, quicker and understands his role much more than he did last season.  His 4 goals aside, he proved an excellent outlet and brought his team mates into play with consummate ease, if you don't believe in him yet, there is nothing that will ever convince you.
Posted by Joe T at 09:03