The Summer seemed to pass interminably slowly, but as I arrived at Eastlands, sorry, the Etihad Stadium last night and had my first beer of the season it suddenly didn't feel that long since we crushed Stoke.  In that time a lot has changed, there has been more furore over the future of a diminutive Argentine striker, the ground has a new name, and we have been linked with every name under the sun.

The confidence around the place remains, on twitter yesterday I saw predictions of 3, 4, and 5 nil, and now foolishly I suggested it would be a lot more cagey than that, and said I would take a 1-0, as long as it brought 3 points....well at half time last night I would have snapped your hand off for any sort of positive score line.  The second half flurry of goals was always going to come really, if it weren't for some fantastic goal keeping from Swansea keeper Michel Vorm on his debut, City would have been in front.  He saved brilliantly from Dzeko and Silva, and right on half time Gareth Barry crashed a left foot strike off the cross bar, it was coming, and when it arrived it changed the game entirely. 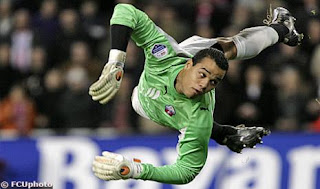 The first arrived after good work from Adam Johnson ended with a shot that was parried to the feet of Edin Dzeko who was left with a simple tap in, a goal that was wholly deserved on the basis of his work rate.  Then the game changed, the introduction of Sergio Aguero lifted not only the 44 odd thousand people in the stadium, but also the rest of the players on the pitch.  City would have no doubt scored a second or even third without him, but the fantasy and devil that the debutant brought with him was terrifying in the best possible way. 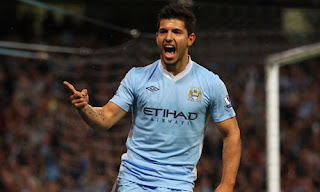 He had his first goal not long after coming on, a lovely low cross from Richards was met at the far post by a sliding Aguero who neatly finished into the corner, everyone was in raptures, the stadium erupted, a star was born.... that wasn't the end of it though.  His deft flick over Vorm, and acrobatic pullback for Silva to fire home the 3rd was a delight, but when in injury time he looked up, found himself some space and crashed home what is clearly one of the goals of the season it became clear just how good Aguero is.  Many people sat around me had a look of disbelief as the impact of his debut wore off, it was truly a stunning cameo.

It wouldn't be fair to just focus on City, Swansea gave it a good go defensively, they looked neat and efficient and at times in the first half they kept the ball extremely well and you have to give them credit for that.  Scott Sinclair looked extremely quick and will cause lesser defenders than Richards many problems, midfielder Joe Allen looked good when he came on, and Scot Stephen Dobbie looked impressive in spells.  It was very much a team effort from the Welsh side, clearly hoping that they would be able to resist City for the 90mins, it wasn't to be however, and although it was a fair score line in my eyes they still deserve a lot of credit for their work ethic. 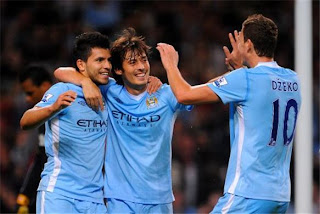 Now for the all important numbers:

Joe Hart: 7 - Didn't really have a huge amount to do, but what little he did was done with confidence and style, City's number 1 for years to come.

Micah Richards: 8 - Superb raids forward from right back, his buccaneering attitude is fantastic and his cross for Aguero's first was excellent.  Showed desire to get back and defend and do the dirty work, very impressive.

Vincent Kompany: 7 - Like Hart had little to do, but kept things safe at the back.  I sincerely hope he will be club captain for years to come.

Joleon Lescott: 8 - The resurgence continues, 12 months ago he was a forgotten man and maligned by many now he is imperious and will hopefully retain his place with the return of Kolo Toure.

Gael Clichy: 7 - Solid debut, attacked well and clearly had more pace than Kolarov to get back and defend, good signs for the future.

Nigel De Jong: 7 - Reliable, solid, bulldog like, you could easily write those three statements for every NDJ performance, came off early with a slight knock, hopefully precautionary.

Gareth Barry: 7 - I really think what he offers the team is underestimated by some, started slowly, but shielded the defence excellently as the game went on, very neat and assured passing, solid.

Yaya Toure: 8 - Really hard to rate, poor first half, backed off too much and wayward passing, but excellent in the second, some great rampaging runs and passing, not fully fit, so I give him benefit of the doubt.

David Silva: 10 - I ran out of superlatives for Spanish Dave many months ago, another superb performance running the show, and behind everything that was good on the night.  Fully deserved goal topped off his game.

Adam Johnson: 7 - Struggled early on, but grew into the game as it went along, caused the Swansea defence no end of trouble, will hopefully get a run in the team.

Edin Dzeko: 8 - What a difference a preseason can make.  Looked a different player to last year, understood his role, took his goal well and worked very hard for the team, will hopefully keep it up.


Sergio Aguero: 9 - Whether there has been a better debut in Premier League history is debatable, but the Argentine was superb.  He was inventive, hard working, devilish and supremely skilled, lets hope there is a lot more to come.


James Milner: 7 - No real time to rate, composed, and energetic, got forward down the wing well, did fine.


Stefan Savic: N/A - Really not fair to judge, had barely any time, couple of poor passes but still finding his feet.

Man of the match has to be Silva for me, Aguero clearly will take all the headlines and deservedly so, but Silva kept the team ticking over for 90mins, he truly is a special player and one that hopefully will be at the club for years to come.
Posted by Joe T at 05:14